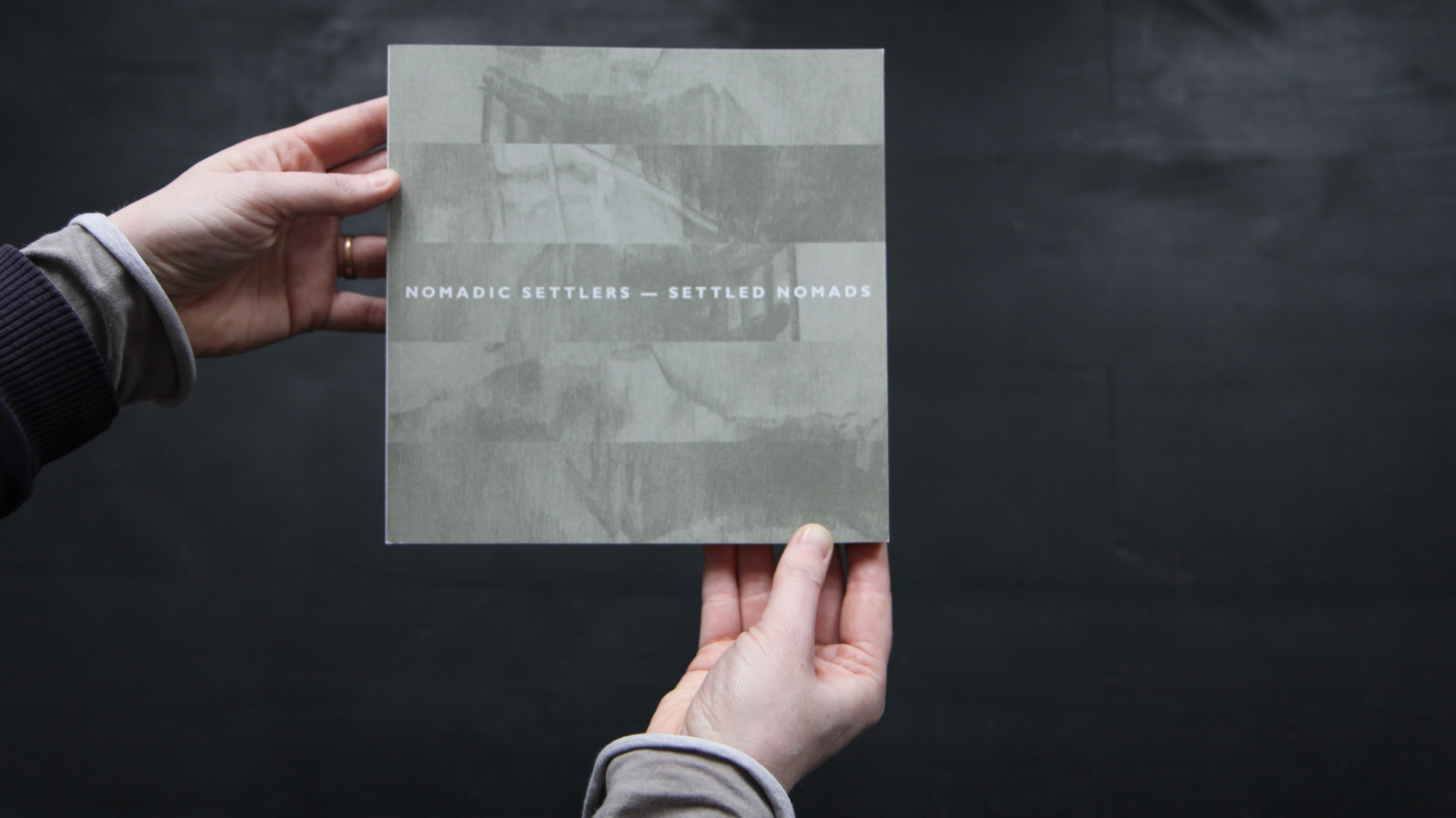 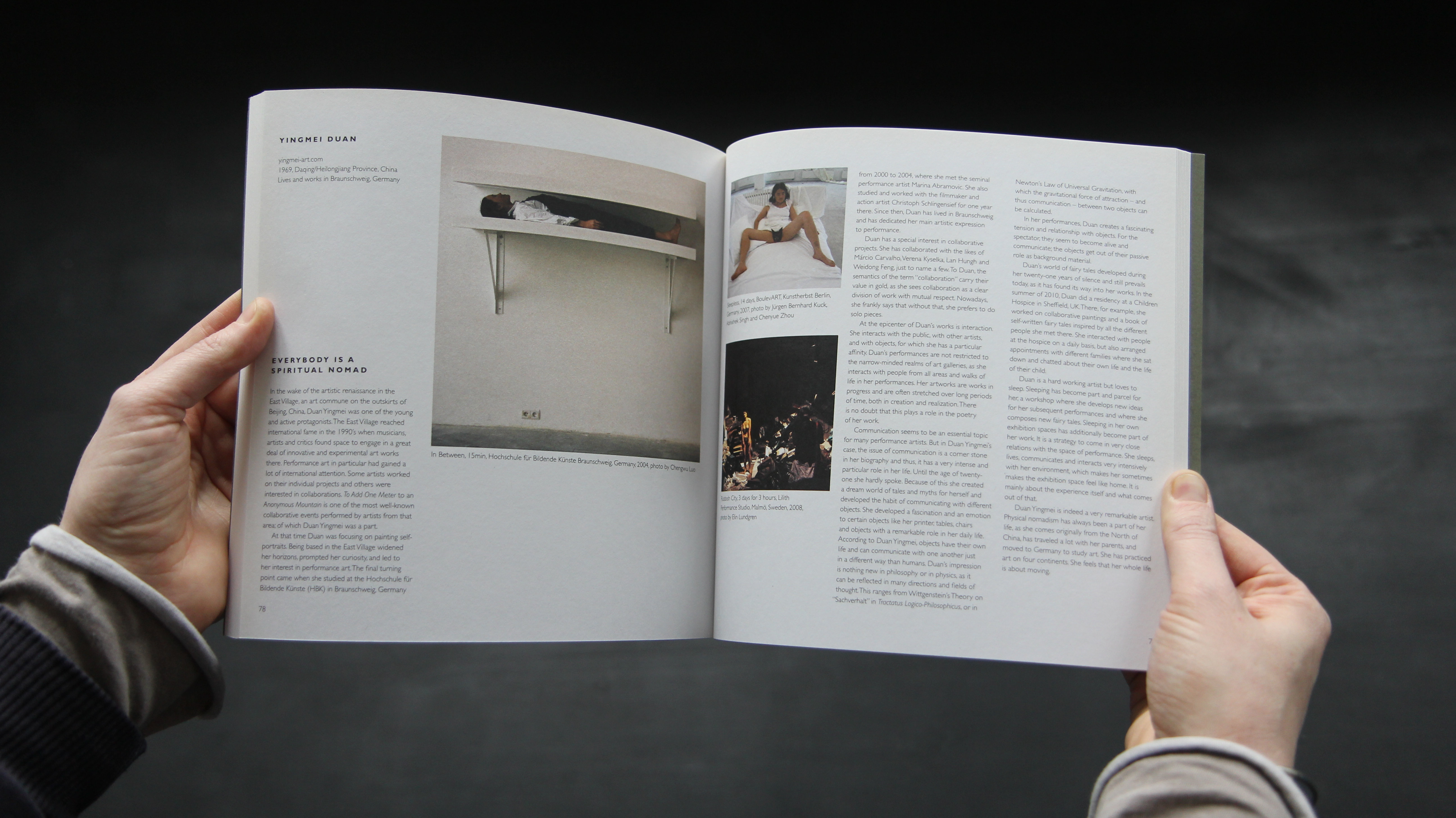 Extract out of the publication:

Juan Duque makes site-specific installations. He re-activates memories through interactions with places and explorations of its surfaces. Putting together tangible materials and leaving room to poetic abstraction, Juan Duque brings back textures and images of landscapes he lived through.

With the eyes of an architect, he develops his ideas on in-situ works where the specific characteristics of a selected site are the starting point; they can be floor patterns and prints, grids, marks, cracks in the walls, spatial angles, light conditions…

Due to the fact that he is not able to be on the exhibition site much in advance, he presents an art piece that is transportable or seen in the context of this exhibition as “nomadic”.

Juan Duque is working on the notion of containers, displacement and vehicles as transportation of memories. Those ideas get crystallized in the physicality of cardboard boxes.

This material and train of thought he started to explore in 2010 for his solo exhibition Evasión at homesession in Barcelona. The box has always been in his mind as a curiosity he wanted to further elaborate upon.

He carries on with the idea of the cardboard box as a remains, but also on the function of the box as a container to transport and move things from one place to another. At the same time the box get damaged and get worn out, especially the inside. These sorts of lines, cracks, landscapes are like topographical lines that start to appear.

Juan Duque makes scans of the memories of different boxes. Visually the large-scale prints look like an esthetic estranged and undefined landscape.

The scanned boxes are printed on very thin paper, floating on the wall, as the notion of fragility fascinates him.

If you unfold a box you get this kind of grid. It functions as a mental map: when you buy a box, you get it as a grid that you have to fold together.

Juan Duque is interested in dysfunctional boxes. He wants the viewer to be confronted with the two-dimensional image of a box and upon that, the viewer tries to mentally fold the box till the point that it is not possible because there are accidents, parts of the boxes that are too much or that are missing.

In 2009 he did an art residency of two months at De Stichting id11 Delft (The Netherlands), an institution that had created for one year an international art residence program placed at ‘Poptahof neighborhood’ located in a community housing blocks outside the city of Delft. Due to urban gentrification the housing blocks were going to be demolished and the former community (mostly immigrants) re-located. Every time a flat was empty, Id11 called an artist to live and work with the community. Juan Duque created five in situ installations with the following text as introduction:

A space…
How to approach it, making it your own…
When entering into 636 flat at Poptahof – Delft for the first time brought about these questions:
“How many times the doors have been opened and closed?”
“Under which circumstances in their inhabitants’ daily lives?”
Many people came to live in those spaces, many people left leaving traces.
I came as stranger, I observed, I imagined, I also had stories to tell…
I took the space as hostage, and worked there to render homage to those memories
Re-appropriation is a territorial struggle…
Working with materials found in the 636 flat – wooden doors, frames, curtains, carpets, newspapers, I constructed in-situ installations that alter the space.
Yet, bit by bit some things start taking place, having a shape, making sense…
Small Kitchen
A room with a carpet
A room with forgotten curtains
A large seating room with a great view to the horizon…
5 small chapels…
Visitors come to make evident the cracks in the surface of the status quo.
Intruders Welcome to flat 636…”


Duque re-presents and re-appropriates one of those in-situ installations in the exhibition space of “Nomadic Settlers _ Settled Nomads”. The installation is a landscape he made out of the remains of a leftover curtain hanging in the flat 636, in which he goes back to his own memories of landscapes in his home country Colombia.

This brings up the interesting question if site-specific or in-situ works are really so site-specific? The meaning of these works got constructed in a very specific location and context. What is the afterlife of the work if you bring it to another context? Does it become something totally different or is the meaning expressed through the piece that strong so that it could function in a different space as well?

Objects, art works move from one exhibition to the other, in the same way as their makers, the artists move around the globe. Are they still the same if they settle themselves in a different place? What is the dynamic between the projection of individual memory on a place and the narration it systematically implies?